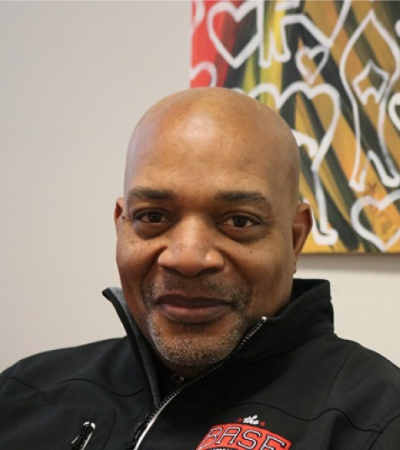 Eric Davis is currently the Executive Director of The BASE Chicago.

The academy is the vision of Major League Baseball player Curtis Granderson and funded in part by the Major League Baseball Youth Development Foundation, the academy will have more than 20,000 youth education and athletic visits by the end of 2017. Mr. Davis is the founder of D&J Entertainment Holdings LLC who are involved with minor league team ownership and the production of sports documentaries, projects such as 30 for 30 “Phi Slama Jama”. Prior to forming DJE Eric Davis was Vice President/COO of Volunteers of America Illinois. Mr. Davis was responsible for the daily operations of three major programs, Veterans Services, Foster Care and Senior and Disabled Housing. He was also the chief liaison for strategic and political relationships. Prior to his time working at Volunteers of America, Mr. Davis was a Chicago Police Officer with over 25 years of police service in the Gang Crimes and Public Housing Units. To counter the threat of gang violence, Mr. Davis worked to negotiate a truce between Chicago gangs such as the Black Gangster Disciples, Latin Kings and ViceLords. At a time when Chicago had the highest homicide rate in the country, his part in the peace process caused the homicide rate in Chicago to plummet.

Mr. Davis was elected to the Chicago Police FOP Lodge 7 Board of Directors; he served in that capacity for 4 years representing more than 20,000 active and retired Chicago Police Officers. He is considered by the Chicago Police Department and numerous institutions of Higher Learning as a Youth gang and International Organized Crime Expert and uses his contacts, influence and knowledge to be on the front line of conflict resolution between street gangs, organized crime elements and the community. He has lectured at more than 500 High schools and middle schools across the country, in addition to Harvard, Yale and Princeton. Mr. Davis has discussed topics that include Gang Economics and Community Development. He has been a featured narrator for the TV program “ GangLand”.

Mr. Davis created the Slick Boys Youth Foundation to work with at-risk youth in the city of Chicago and across the country. He co-authored “ The Slick Boys” A Ten Point Plan to Rescue your Community( Simon & Schuster). Mr. Davis was the creative consultant for the “ Ricki Lake Show “ “ New York Undercover “ and the “ Judge Hatchet Show “. While assigned to the Cabrini Green Housing Development, he along with the Slick Boys and in partnership with Al Carter and Patricia Hill created the largest inner city little league baseball program in the nation. The league became the inspiration for the movie “ Hard Ball- A Season in the Projects “ which starred Keanu Reeves.

Mr. Davis attended the University of Houston and was team captain of the 1982 Final Four Basketball team, playing with NBA Hall of Famers Hakeem Olajuwon and Clyde Drexler. After college Mr. Davis signed a free agent NFL contract with the Houston Oilers (Tennessee Titans), Mr. Davis also played professional basketball in the European League playing for the Killester Cats in Dublin Ireland. He is a Summa Cum Laude graduate with a degree in Sociology. Mr. Davis is a member of Omega Psi Phi Fraternity Inc. Mr. Davis is also active as a board member on the following boards: DePaul University School of Liberal Arts Advisory Member, Delaware Place Bank and Pitch In for Baseball.