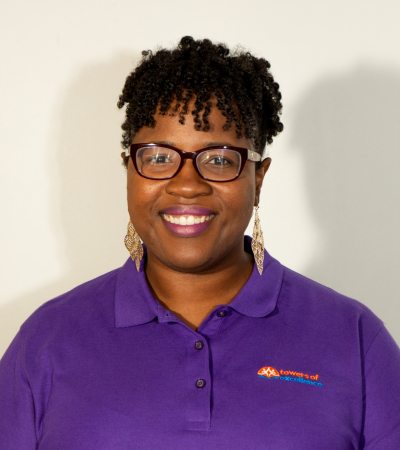 Angelica Yvonne Granger brings over a decade of teaching and mentoring experience to Towers of Excellence. As a teacher, Angelica worked with 4th and 6th graders at Catalyst Circle Rock to assist students in reaching their fullest potential both academically and behaviorally. During this time, Angelica felt the need to not only reach students academically, but also socially and emotionally through mentoring, particularly within the Austin community. Because of this yearning, she joined Big Brother Big Sister (BBBS) and served as a mentor for 7 years. In this time, Angelica’s mentorship of junior high and high school students led to increasing high school graduation rates and college attendance.

Angelica joined Towers of Excellence in 2015 as a founding mentor where she made a profound impact on middle school students of all ages. The program assists in developing the values of the mentees, which has positively impacted their confidence and self-worth. Angelica saw continuous growth in her mentees as they matriculated through middle school and high school.

In 2018, Angelica started Order My Steps, an organization focused on mentoring and scholastic readiness. With the partnership of Tower of Excellence, four scholars were accepted to the university of their choice, achieved high honor roll status, and secured scholarships for tuition. This year, Angelica looks forward to the continued success of the program with the incoming high schoolers.

Angelica has a Bachelor of Science in Elementary Education from Chicago State University and a Master of Science in Curriculum and Instruction from Saint Xavier University. She has a passion for serving the community and assisting the youth in reaching their potential.